The perfect description of the 1973 Can-Am champion Porsche 917/30 comes without qualification or equivocation from Mark Donohue in his landmark book The Unfair Advantage. . . “It is to me the perfect racing car.”

Porsche’s mighty 917/30 turbo Can-Am champ was the perfect car at the wrong time, a time of massive change. Politics and global economics would soon disrupt the grammar and conduct of international motorsport. Porsche’s doomsday 917/30 Group 7 racer was playing by rules — or the lack of them — composed a decade earlier when new technologies mingled with expanding economic power. By 1974 that would change. The unlimited Can-Am suffered most of all. Donohue admitted he never had to extend Penske’s 917/30 to the edges of its considerable performance envelope. No matter. It dominated the 1973 Can-Am season just as the oil embargo made unlimited racers like the 1000-plus horsepower — some claimed over 1,500 hp! — 917/30 seem like creatures from another time. And while it set a closed course speed record of 221.16 at Talladega Super Speedway that stood for 20 years, no one really knows the “perfect racing car’s” ultimate top speed.

“At Watkins Glen in 1973 Donohue’s fastest race lap in the 917/30 during the July Can-Am/Six Hour weekend was almost two seconds faster than the best F1 cars achieved on the same course in the ’73 US Grand Prix in October,” said Bill Warner, founder and Chairman of the Amelia Island Concours d’Elegance. “The 917/30 remains the most powerful circuit racing car ever built.”

“It could smoke the tires at 150 mph,” said Warner. “I remember it blasting up Wedgewood straight at Watkins Glen, cresting the hill going into the Loop at well over 200 mph with its nose still in the air because it was still accelerating so hard! We won’t see its likes again except at a concours or in a museum.”

Then the primary goal of the major motorsport sanctioning bodies turned from encouraging high speeds and high performance to limiting speed and power and slowing the racers. Penske’s mighty Porsche 917/30 Can-Am champion and the unrestricted age it represented so perfectly were swept away. 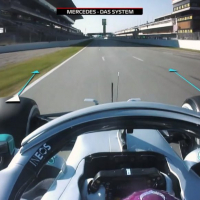 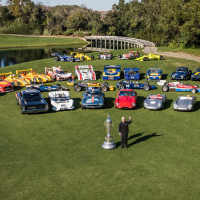